21st Century Wire, January 12 2014: … Moreover the Iranian Mujahideen are considered to be involved in undermining the bus with Israeli tourists in the Bulgarian resort of Burgas in summer 2012. The Bulgarian secret services allegedly accused Lebanese Hezbollah but the group rejects all charges despite the fact that it took the responsibility for many terrorist attacks previously …

It’s incredible when one looks behind the scenes of the facade of ‘diplomatic relations’ with the likes of John Kerry masquerading as a globetrotting statesman, mostly enacting damage control in response to the tangled spider’s web of CIA-steered terrorist organizations around the world. “As long as we control them, they’re our terrorists”, or so the mantra goes.

The important concept for our readers to grasp in all of this is that more often than not, countries like the US, Israel, Britain and France, will employ third parties to carry out assassinations on their behalf. The main reasons for this are fairly obvious – to maintain ‘deniability’ should any individual plot be exposed causing an international incident.

Secondly, readers should understand that the US detention facility at Guantanamo Bay has nothing to do with detaining terrorists who threaten America citizens. That was merely the public relations myth which Washington conveniently put forth in the aftermath of 9/11. The true function of Gitmo (and the reason why it has remained open for business for so long) and similar detention facilities worldwide, is to prepare suitably corrupt Islamic extremists and other militants to become double agents before they are sent back into the field. Any detainees who cannot fulfill this purpose for the CIA are either laid to waste in jail, or allowed to ‘expire’.

In 2012, former US Secretary of State and 2016 Democratic Presidential candidate Hillary Clinton (photo, above), formally removed the Iranian opposition group, PMOI-MEK from its blacklist of designated terror groups. Note that this move by Clinton in 2012 set the stage for this latest bombshell revealed below – where the US appear to be offering some sort of financial incentive to Romania in return for them allowing that Eastern European country to be used as a forward operating base to launch terror attacks globally.

But as you will learn, the story goes back much further than Clinton’s clandestine move to secure this private terror army. Go back to Iraq, and even before, to see the full scope of this US intelligence-controlled terrorist army.

Why maintain such a terrorist force in the region? Answer: to maintain the upper hand in all foreign affairs by controlling and steering the business interests of the worst criminals. Drug-running, human trafficking, smuggling and kidnapping are only some of the lucrative business used to generate black budget cash and grease the skids of corruption in the Middle East and Central Asia.

Hillary Clinton’s hands are extremely dirty in this regard.

Now the US are wanting to plant these criminal inside Europe. Watch this space…

Special thanks to writer Fatemeh Hashemi for bringing this story to our attention today.

SOFIA – According to the American TV channel NBC and other media reports, the MEK played its role in the assassination of Iranian nuclear scientists. According to other data, the organization was also involved in the murder of Mojtaba Ahmadi, the IRGC cybersecurity service commander, as well as in a serious accident at the factory for…

Link to the original report (Bulgarian)

As it became known from the Romanian Foreign Ministry employees dialogue in a social network: http://danamarca70.wordpress.com/2013/12/18/48875763/

Currently the U.S. and the Romanian government are negotiating the deployment about 3,000 representatives of the terrorist organization “Mojahedin-e Khalq” (MEK) on the territory of Romania. It is assumed that in the case of the Romanian leadership consent members of the group will be compactly settled near the city of Craiova.

According to Ioana Raiciu and Dana Marca, the Romanian Foreign Ministry employees:

The U.S. State Secretary and the Romanian Foreign Minister discussed the issue of militants migration during the meeting in Brussels in early December.

John Kerry’s adviser Jonathan Weiner who deals with the problem of MEK migration is to arrive in Romania with the same purpose.

I turned to the Romanian Foreign Ministry press service for confirmation of these data by phone using the telephone numbers listed on the ministry’s website, but they refused to give any comments, saying this is a too sensitive issue.

Indeed, the disclosure of the information about moving about 3 thousand terrorists to the country is sure to cause a violent public backlash against the government. At the same time, the information leak to the Internet possibly means that Romanian authorities are trying to test the waters before making official statements.

So what sort of an organization the “Mujahedin-e Khalq” is?

“Mojahedin-e Khalq” is an Iranian Islamist terrorist organization in exile, which advocates the overthrow of the Islamic Republic of Iran. Since its inception in the mid 60s, this group has made numerous assassination attempts on the Iranian leadership, murdered the U.S. military personnel and civilians, supported the seizure of the U.S. Embassy in Tehran in 1979 calling for the execution of embassy staff.

In 1981 MEK members killed 70 Iranian officials including the prime minister, the president and the head of the judiciary. A decade later, they organized a coordinated attack on the Iranian embassies in 13 countries. During the Iran-Iraq War, 1980-88, the group fought against Iran on the side of Saddam Hussein. In total the organization killed more than 50 thousand people in different countries.

In 1997, the U.S. State Department put the MEK into a list of terrorist organizations. And in 2002, the European Union did the same, but in 2009 the EU crossed it out of the list. And in 2012, the United States followed the example. At the same time, the organization is still considered a terrorist one in Iran and Iraq. 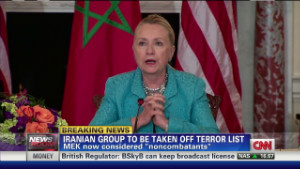 One can hardly say that the MEK has completely abandoned the ideas of terror. According to the American TV channel NBC and other media reports, the MEK played its role in the assassination of Iranian nuclear scientists. According to other data, the organization was also involved in the murder of Mojtaba Ahmadi, the IRGC Cyber Security Service commander, as well as in a serious accident at the factory for the production of heavy water in Arak in autumn 2013.

According to the American TV channel CNN, a terrorist organization has a strict military structure. The MEK headquarters is based in the so-called Ashraf “refugee camp” in Iraq

You can see a straight column in blue and white uniform marching on a spacious area framed by the lion sculptures. According to Michael Ware, the author of the video, back in 2007 Camp Ashraf numbered about 4,000 fighters and was one of the best military bases in Iraq. The MEK has more than 2,000 tanks, artillery, armored personnel carriers and air defense means. The territory is a small town with shopping malls and hospitals, blooming gardens, monuments and fountains, which is totally unexpected in war-torn Iraq.

Moreover the Iranian Mujahideen are considered to be involved in undermining the bus with Israeli tourists in the Bulgarian resort of Burgas in summer 2012. The Bulgarian secret services allegedly accused Lebanese Hezbollah but the group rejects all charges despite the fact that it took the responsibility for many terrorist attacks previously.

The terms of an agreement are still unknown. However, the U.S. is likely to use all available means and methods of pressure and persuasion to make Traian Basescu take the right decision. It is obvious that the United States doesn’t really care about the interests of Romania and its people as well as the security in the Balkans.

Arbana Vidishiqi and Antoine Blua, Radio Free Europe, November 14 2013: … Likmeta notes that Albania agreed to take in 11 former Guantanamo Bay prisoners and 210 members of an Iranian opposition group, the Mujahedin-e Khalq Organization (MKO). It also supported Washington in its military campaigns in Afghanistan and Iraq. The Organization for the Prohibition […]

Fars News, December 02 2013: … He said Iraq’ obedience to the UN decisions is the main reason in the inability of Iraq to expel members of the MKO group, adding that MKO’s activities may influence the Tehran-Baghdad relations. The terrorist MKO group-let based itself in Iraq during the 1980s and abetted the Iraqi dictator […]

Fars News, Baghdad, October 19 2013: … The source said the defected members are kept in a separate building away from those who are still an MKO member and they have access to different means of communication to contact their families. The ringleaders of the group, including Farzaneh Meidan Shahi and Esmayeel Mortezayee also known […]

Families Of Mujahedin-e Khalq (MEK or Rajavi Cult) Members In…
Nejat Society, May 31 2020:... Messages and letters from a number of families in West Azarbaijan Province, addressed to Albanian PM requesting communication with their loved ones in the MEK Camp . It should be noted that in recent years, many families in West Azarbaijan Province have died while waiting to visit their loved ones and have never been able to…

Assassination of MEK Critics encouraged on Albanian based TV (Iran…
Iran Interlink, May 30 2020:... MEK leaders this week used the MEK’s TV programme to officially announce that ‘the assassination of families and critics is a duty wherever possible’. In this programme Parviz Khazaei – Rajavi’s NCRI representative in Scandinavia who had been a diplomat in the Iranian embassy at the time of the Shah, and later worked for the…

Mujahedin-e-Kalqh MEK UANI and the secret puppet-masters
Medea Benjamin and Nicolas J. S. Davies, Press TV, May 30 2020:... But Iran placed UANI on its own list of terrorist groups in 2019 after Mark Wallace and UANI hosted a meeting at the Roosevelt Hotel in New York that was mainly attended by supporters of the Mujahedin-e-Kalqh (MEK). The MEK is a group that the US government itself…

US Supporting MEK Terrorists Not Qualified To Judge Others ;…
Mehr News, Tehran, May 25 2020:... Mousavi then pointed to the US’ all-out support for the terrorist Mujahedin-e-Khalq Organization (MKO), which has assassinated 17,000 Iranian citizens and officials over the past four decades. He also cited the creation of and support for the savage and bloodthirsty ISIS terrorist group as another example of the historic American crimes in recent years.…

Criminals And Terrorists In Albania
Paolo de Donno, europeanaffairs, May 24 2020:... Secondly, since 2016 the headquarters of the People's Mujahedin-e of Iran (MEK) has been established on Albanian soil in Manez, near Durres; Historically, this group had supported the struggle against the Shah in 1963 and then participated in the Khomeinist revolution of 1979. From an ideological point of view, it is a synthesis…

My Children In Albania And Their Basic Human Rights –…
Nejat Society, May 23 2020:... My children Mehri, Nahid and Mahmoud Saadat have been mentally and physically imprisoned in the MKO for 33 years. Mr. Secretary General, Please think of us for just five minutes. Our only request is a private visit. If you have emotions, if you love your children, you might understand us. Not only you should condemn…

Albanian PM Edi Rama Asked To Help MEK Families
Nejat Society, May 21 2020:... Simultaneously with the nationwide signature petition, a number of families of the members trapped in the Mojahedin-e Khalq Organization (MEK) camp in Albania from Gilan province (north of Iran), have sent separate messages and letters to the Albanian prime minister, urging him to be able to visit or at least have video or audio contact…

Massoud Rajavi Biography
Terror Spring, May 20 2020:... Massoud Rajavi travelled to Jordan as an interpreter of the expedition to Fatah, and returned to the second quarter of the cadre after returning on April of 1971. He mentioned the date of his arrest was on the afternoon of 1971/08/26, but in his detention center ID, his detention was announced on 1971/07/23, about a…