Saeed Kamali Dehghan, Guardian, May 17 2014: … The MEK appearance at the programme reportedly made the UN special rapporteur for human rights in Iran, Ahmed Shaheed, to withdraw from the event, the Nation’s Ali Gharib reported on Wednesday. To much criticism by the Iranian authorities, Shaheed has extensively reported on the violations of rights in Iran …

As west moves towards reconciliation with Tehran, Ottawa is making a big mistake by pursuing a wrong policy which isolates Iran and hurts its people 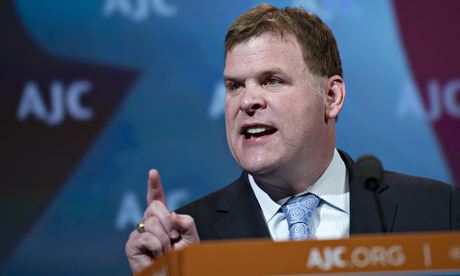 Ever since Canada broke off diplomatic relations with Tehran, Ottawa has toughtened its stance on Iran, taking a similar approach to that of Israel.

As the west seizes upon the opportunity to engage with the moderate president, Hassan Rouhani, Canada just seems to be going in the opposite direction, ignoring not only calls for dialogue by the international community but also from the very Iranian dissident voices Ottawa claims to be defending. Instead, Canada is siding with radicals – dodgy exiled groups and rightwing Israelis – and moving away from the realities on the ground.

In 2012, Canada’s foreign affairs minister, John Baird, described Iran as “the most significant threat to global peace and security in the world today” as it announced a unilateral decision to shut down his country’s embassy in Tehran and expel Iranian diplomats from the Canadian soil.

Within a year, as Rouhani travelled to New York to revamp Iran’s relations with the west backed by strong popular support at home, Baird warned “kind words, a smile and a charm offensive are not a substitute for real action.”

Later, as Iran and six world powers including Britain and the US, reached a historic nuclear agreement in Geneva, trying to defuse the threats of yet another war in the Middle East, Canada injected deep scepticism.

But Ottawa’s policy of isolating Tehran, at the time Rouhani is under pressure from internal hawks and fudamentalists, is doing a disservice both to the future of peace in the world and the wellbeing of Iranians themselves. By rejecting engagement with Iran, Canada is also turning a blind eye to repeated calls by leading Iranian opposition figures, for the unique opportunity created because of Rouhani’s election.

This week’s Iran human rights event at Canada’s parliament embodied what is wrong with Ottawa’s approach. A key speaker at a programme studying violations of human rights in Iran was Maryam Rajavi, the leader of the radical exiled group MEK, which was listed as terrorist organisation by the US and the UK until recently. The MEK, charactrised by many observers as a cult-like group, has been repeatedly slammed by the United Nation because of mistreating its own members.

The MEK appearance at the programme reportedly made the UN special rapporteur for human rights in Iran, Ahmed Shaheed, to withdraw from the event, the Nation’s Ali Gharib reported on Wednesday. To much criticism by the Iranian authorities, Shaheed has extensively reported on the violations of rights in Iran, including mistreatment of prisoners, some of whom are in fact in jail in Iran for having links to the MEK.

“If you want to improve human rights in Iran, don’t invite MEK leader, a group accused of serious human rights violations, as a speaker,” tweeted Golnaz Esfandiari, who blogs on Iran. The MEK remains extremely unpopular in Iran because of its support for the former Iraqi leader, Saddam Hussein, during the eight-year war between Iran and Iraq. MEK fought against their countrymen at the time.

Earlier this month, Lobelog’s Eldar Mamedov detailed how the MEK is using human rights as its casus belli to mix up the complexities of politics inside Iran for an outsider eye and derail the process of Iran-west rapproachment. It looks as Canada is repeating a mistake the US and some European countries did decades ago by relying on radical groups such as MEK, or some Iranian monarchists, to keep itself updated about the complicated bigger picture of today’s Iran.

Moreover, Canada often berates Iran in the excuse of defending human rights activists and opposition figures who have been imprisoned in Iran. But when the very same people, including 50 prominent political prisoners, reached to US president Barack Obama asking him to end “crippling” economic sanctions hurting ordinary people in Iran and seize “the last chance” for dialogue with Tehran under Rouhani, Canada seemed to have sealed its ears.

Instead, it should listen to more reasonable voices, such as it own former ambassador to Tehran, John Mundy, who has stated it was wrong for Ottawa to cut diplomatic ties.

Let’s be clear, no one is denying the gross abuses of human rights in Iran or the challenges ahead in finding a permanent nuclear settlement with the Islamic republic. But human rights in Iran can only be improved by the ways of dialogue and engagement. This is why the recent visit to Iran by the EU’s foreign policy chief, Catherine Ashton, who visited a number of leading women rights’ activists, was more effective than Canada’s many human rights statements.

Canada has had a very frosty relations with Iran since the 1979 Islamic revolution. It became more restrained in 2003 when an Iranian-Canadian photographer, Zahra Kazemi, died while in jail in Iran under torture because of a skull fracture. But if Ottawa is genuine about the wellbeing of Iranian citizens, including those persecuted in the country, it should reconsider its Iran policy. But for now, Canada is just getting it wrong on Iran.

US Embassy Takeover, the Mojahedin Khalq For or Against (MKO, MEK, PMOI, NCRI, Rajavi cult)

Hmid Babei, Fox News, May 10 2014: … But through what the RAND Corp. called “cultic practices and its deceptive recruitment and public relations strategies” as well as giving millions of dollars to politicians and lobbyists in Washington — where it seems everyone has a price tag as campaign donation or “speakers fees,” the MEK managed to get itself removed from the list …

Andrew Cockburn, Harper’s Magazine, May 08 2014: … former senior official with the German foreign office told me the real story: the documents were provided to Germany’s intelligence service by an occasional source who was part of the Iranian-exile terrorist organization Mojahedin-e-Khalq (MEK). The obviously self-interested MEK member was thus the Iranian equivalent of the now-discredited Iraqi source known as “Curveball,” whose tales of mobile bioweapons labs in Saddam’s Iraq became the centerpiece of the Bush case for invading Iraq. It is well documented, however, that the Israeli Mossad was …

A.Sepinoud, Nejat Bloggers, May 07 2014: …  When in 2012 US State department removed the name of Mujahedin-e-Khalq Organization (MKO) from its list of foreign terrorist organizations critics correctly criticized the USA foreign policy’s double standards towards terrorism. Many critics considered the decision as a way to clear legal barriers in the way of overtly arming …

Caleb Maupin, Russia Today, Mat 07 2014: … Luis Posada Carrilles, a Cuban “protester” who bombed an airplane killing over 70 people is living very comfortably in Miami. Terrorists from the “People’s Mujahadeen” (MKO) in Iran, who have tortured and murdered for decades, are happily embraced by political leaders like Tom Ridge, and provided safe evacuation …

Nejat Bloggers, May 05 2014: … Five MKO members residing in Temporary Transit Location, Iraq managed to escape the Camp at dawn Sunday and surrendered themselves to the security forces, Ashraf News reported. Mohammad Salman Al-Asadi; a security officer responsible for Camp Liberty protection quoted the escapees that they had planned for …

Iran Interlink Weekly Digest – Jan 24 2020
Iran Interlink, January 24 2020:... The Americans use MEK there to provoke Iran, but Iran doesn’t react. In Farsi this is a well-known scenario. Everyone knows what is happening. For the MEK it is a dream come true. This is what they have asked from the CIA before – to be able to silence ex members. Some writers have exposed…

Regime Change Using MEK A Hopeless Plan
Dr. Dan Steinbock, FX Street, January 23 2020:... By November 2017, Bolton urged the US to have a contingency plan for a “Shah of Iran scenario” and regime change before February 2019; the 50th anniversary of the Iranian revolution. His change agent was Mojahedin-e Khalq (MEK), an Iranian opposition group which advocates a violent coup in Iran. In the early…

Will MEK Haunt Albania ?
Nejat Society, January 22 2020:...  Albania backed the US attack to assassinate the Iranian general Qassem Soleiman, on the first days of January 2020. Whether Albania is a democratic country or not, it is now publicly supporting the terror of an Iranian official and advocating and sheltering the Mujahedin Khalq Organization (the MKO/ MEK/ PMOI/ Cult of Rajavi) with a…

Albanians Pay The Price For Hosting MEK Terrorists
DW, Deutsche Welle, January 22 2020:... The US and Albania reached a humanitarian agreement and in 2013, thousands of MEK members were resettled to the Balkan country. Indeed, Albanian Prime Minister Edi Rama said following Khamenei's threats the resettlement resulted from his country's "unwavering alliance" with the US. Rama concedes that taking in the MEK members poses a risk for…

US Imposed MEK Terrorists Put Albanians At Risk
Elis Gjevori, TRT World, January 16 2020:... In 2014, under US pressure, Albania took in more than 4,000 members [Correct number is 2100 - Iran Interlink] of the People's Mujahedin of Iran (MEK) a secretive group formerly based Iraq. “Albania is hosting one of the most dangerous terrorist organisations on behalf of the United States,” says Dr Olsi Jazexhi, an…

MEK Bots In Albania Main Source Of Retweeting Donald Trump’s…
Daniel Moattar, Mother Jones, January 16 2020:... Trump was bragging about his tweet in Persian being the most retweeted Persian-language tweet. But much of that retweeting happens by these bots, and through these online activist cyber armies like the MKO (Rajavi Cult, MEK, NCRI, ...) . Their activism, now, is basically tweeting. They have these halls of aging activists sitting behind computers and…

Nejat Society Newsletter No. 67
Nejat Society, Tehran, January 14 2020:... After the fuel demonstrations in Iran were quashed, Iran’s right wing claimed the MEK was behind the violent unrest.  The MEK also claimed they were behind it.  Genuine opposition groups and demonstrators said they need to have the right atmosphere and conditions so that people can demand their rights without the interference of MEK,…

Trump Admin Walks Back Anti-MEK Memo
Betsy Swan, Erin Banco, Asawin Suebsaeng, The Daily Beast, January 14 2020:... Trump lawyer Rudy Giuliani—who the MEK hired to help it get off the U.S. list of foreign terrorist groups and who recently called the group “my MEK people”—welcomed the reversal. “[The MEK] is very supportive of a free…Iraq. It’s run by a great woman who is committed to…